What is Blow-out? How is it diagnosed? What can be done if there is a Blow-out?

What is Blow out?

Blow out is a rupture and blockage of the very thin epididymis tube (only 0.2 mm in diameter) situated on top of the testis. It is caused by the back pressure of fluid trapped in the tubes below the vasectomy and peaks during ejaculation. In otherwards, blow-out is the secondary epididymal obstruction. Blow out is painless, so vasectomised men would not feel this happening. Statistically the chances of a man developing ‘blow out’ after vasectomy start at zero immediately after the vasectomy and increase by approximately 2% per year. There is one exception to this rule, and that is when a sperm granuloma is present at the site of vasectomy. Granuloma is a firm swelling on the lower end of the vas and varies in size from a small pea to a Murray mint. It is caused by leakage of sperm from the cut end of the vas immediately after vasectomy and is quite common, about 1 in 3 men. We have found that where granuloma is present there is never a blow out, probably because it acts as a pressure release valve.

How is the  Blow out diagnosed?

One could never be one hundred percent certain about the blow out. However the following features help.
a. Colour and texture of the fluid from the end of the vas that is attached to the testis. Clear or off-white fluid is good sign. On the other extreme, white paste-like fluid is almost diagnostic of Blow out.

b. Microscopic Testing of the fluid from the testicular end of the vas: If sperms are present then we should be capable of more than 95% success providing the tube is repairable. If sperms are not present and if the fluid is thick paste-like, then conventional reversal by vaso-vasostomy will not work and vaso-epididymostomy will be appropriate to do atleast on one side. So always check if the surgeons checks the fluid during the operation that is one of the most important parameters that will help to decide appropriate choice of procedure. In htis slide you can see there is no sperms or sperm fragments. There are only a type of cells called round-cells. 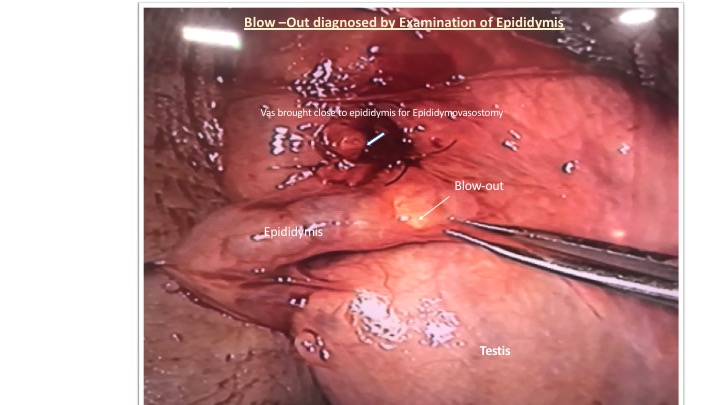 What can be done about it?

If there is blow-out, the only solution is to perform a vaso-Epididymostomy. This is joining the distal (terminal end) of the vas directly to the epididymis before the level of the blow-out. The success rate is not as good as the Vaso-Vasostomy. But if there is confirmed blow-out, this carries better chance of doing a vaso-vasostomy or doing nothing. 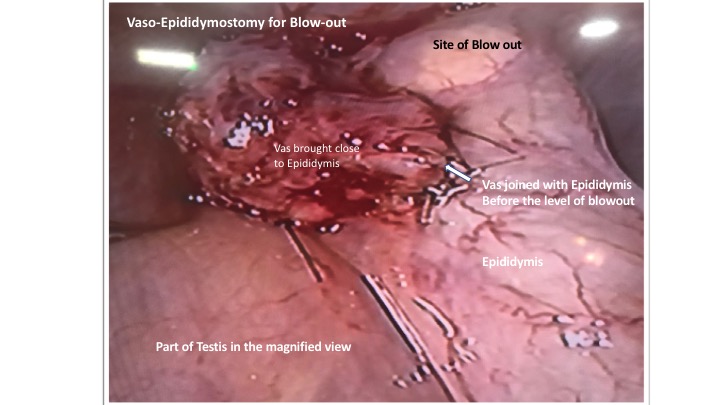 We routinely do  both Vaso-vasostomy and vaso-epididymostomy as per the need of each patient at the time of the procedure. Call us today for free consultation on 01642 939798.

Posted on September 10, 2018 by Manohar Jesuraj | Posted in News
Back